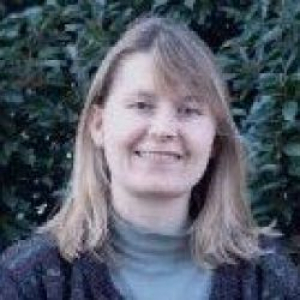 Prof. Scholberg's broad research interests include experimental elementary particle physics, astrophysics and cosmology. Her main specific interests are in neutrino physics: she studies neutrino oscillations with the Super-Kamiokande experiment, a giant underground water Cherenkov detector located in a mine in the Japanese Alps. Super-K was constructed to search for proton decay and to study neutrinos from the sun, from cosmic ray collisions in the atmosphere, and from supernovae. On Super-K, Prof. Scholberg's primary involvement is with the atmospheric neutrino data analysis, which in 1998 yielded the first convincing evidence for neutrino oscillation (implying the existence of non-zero neutrino mass).

One of the most important questions that we may be able to answer with neutrino oscillation experiments over the next couple of decades is the question of CP (charge conjugation-parity) violation in neutrinos. It's now well known that processes involving quarks violate CP symmetry; it's suspected that the same is true for leptons (such as neutrinos), but leptonic CP violation is as yet unobserved. We hope that understanding of CP violation, along with knowledge of the other neutrino parameters, may lead to insight into the question of the observed matter-antimatter asymmetry of the universe. The long-term program neutrino oscillation physics aims to answer these questions.

The next steps in neutrino oscillation research involve artificial beams of neutrinos sent hundreds of kilometers from accelerator laboratories to underground detectors. The T2K ("Tokai to Kamioka") high-intensity beam experiment sends neutrinos 300 km from an accelerator at the J-PARC facility in Japan to Super-K, and is currently exploring unknown oscillation parameters. The DUNE (Deep Underground Neutrino Experiment) is a planned next-generation U.S.-based international experiment designed to observe neutrinos beamed from Fermilab to a large liquid argon detector at a new underground facility in South Dakota.  One of Prof. Scholberg's particular interests on DUNE is the detector's sensitivity to the huge bursts of neutrinos from core-collapse supernovae.

Prof. Scholberg also coordinates SNEWS, the SuperNova Early Warning System, an inter-experiment collaboration of detectors with Galactic supernova sensitivity. Neutrinos from a core collapse will precede the photon signal by hours; therefore coincident observation of a burst in several neutrino detectors will be a robust early warning of a visible supernova. The goals of SNEWS are to provide the astronomical community with a prompt alert of a Galactic core collapse, as well as to optimize global sensitivity to supernova neutrino physics.